We use New Relic to track stats. I’m wondering if there’s a way to change the hostname of a release container to be something other than the git release so that New Relic uses it for its “Host ID”, as seen in the attached screen shot. (Our current, non-container-based infrastructure reports the server names to New Relic, while the Aptible containers are named by the git release.)

I’m aware that there are options to fix this on the New Relic end, but first I wanted to ask if there was something we could on the Aptible end. 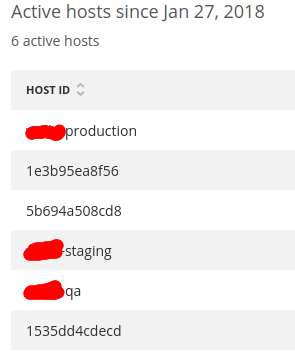 Note that the hostname is not the git release. It’s just a random hostname generated by Docker and assigned to this particular container.

Note that in New Relic, you can also set process_host.display_name in the newrelic.yml configuration file, or use the NEW_RELIC_PROCESS_HOST_DISPLAY_NAME environment variable in order to override the name.

Thanks for the clarification about the hostname. For whatever reason, I’m not having any luck with setting that config. I have also written to New Relic to see if I missing something.
Also, is it possible to get a different name for each service? Since our app has 3 containers, it’d be nice distinguish between them.

I’ve written to New Relic, and they replied:

At this time, we are naming the container based upon the container ID. Unfortunately, there isn’t a public configuration setting to change this at this time. So you were correct when you saw that process_host.display_name didn’t produce the desired effect.

Maybe I have been going about this the wrong way? Is there a way to incorporate the APTIBLE_PROCESS_TYPE into the container name? If that could be incorporated, my issue on New Relic would be solved, because I could easily tell which container was doing what.

No, the process type is not included in the container name. I’m a little unclear on what exactly you are trying to achieve (we’ve never had other customers having difficulty with this) — what are you using this host list for?

I was just hoping for an easy way to tell which container was running which service in New Relic, that’s all.